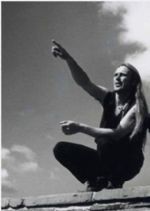 It is with great sadness that we report that Robert Heaton died suddenly on Thursday November 4th 2004. A multi-talented instrumentalist and song-writer, Robert joined the band in 1982 and for the next fifteen years co-wrote many of the band's greatest songs, including being responsible for all the music to the anthem 'Green & Grey'. A consummate professional when it came to recording and performing, in public Robert was the powerhouse behind the rhythm driven sound of New Model Army. In the media and in private, he was always the perfect gentleman.

Robert left NMA in 1998, having recovered from surgery to remove a brain tumour, and since then has worked tirelessly to promote live music and original talent in his home town of Bradford in Yorkshire. His latest project, Fresh Milk, is such a scheme - encouraging young bands, playing wholly original music, onto the live circuit by producing low cost, high quality live recordings for them. He had also been working composing film scores for independent films as well as working on his own new material under the guise of Gardeners of Eden.

A post mortem has determined that Robert had been suffering with pancreatic cancer and it is almost certainly this that was the cause of this unexpected tragedy..

Robert's passing will be mourned by family, friends and fans around the world. He leaves a wife, Robin, and young son, Marlon.

Tributes to Robert have poured in from all over the world and obituaries have run in many publications including The Independent, The Times and MOJO magazine. The text of these is accessible below, but perhaps the most fitting and heartfelt tribute is that posted by former NMA bassist Moose on his website on his return from Robert's funeral service.

A book of condolences is running and contributions should be sent to This email address is being protected from spambots. You need JavaScript enabled to view it.. The completed book will be presented to young Marlon.

Rest in peace Robert, you are greatly missed

The radical rock group New Model Army exists outside the mainstream of British pop but their alternative outlook and rousing music have earned them a dedicated cult following.

Robert Heaton joined the group - named after the Sir Thomas Fairfax/ Oliver Cromwell revolutionary forces in the English Civil War and still led today by Justin Sullivan (a.k.a. Slade the Leveller) - as their drummer in 1982 and stayed with them for 16 years. He contributed to their breakthrough recordings - the mini-LP Vengeance in 1984, the single "No Rest" and the corresponding No Rest For the Wicked album in 1985 - and effectively became Sullivan's right-hand man both for live appearances and in the studio. Despite lack of airplay, New Model Army carved their own independent niche throughout the Thatcher years and always remained true to their militant beliefs even when signed to major labels such as EMI and Epic/Sony.

Following surgery on a brain tumour, Heaton left the group in 1998 and set up his own recording studio - simply called Mutiny 2000 in Bradford.

Born in Knutsford, Cheshire, in 1961, Robb Heaton began playing guitar and drumming along to his dad's collection of trad jazz recordings. He developed a very eclectic musical taste, taking in obvious rock influences like Led Zeppelin and ZZ Top but also but also the country music of Johnny Cash and classical composers - Beethoven, Mozart Tchaikovsky and Vivaldi. His wide-ranging musical interests are manifest when he wrote the music for the anthemic "Green and Grey" as well as co-writing with Sullivan the New Model Army singles "Better Than Them", "Brave New World", "51st State", "Poison Street", "White Coats", "Space" and "Here Comes the War".

Heaton had moved to Bradford at the beginning of the Eighties and in 1982 joined the second line-up of New Model Army which, as well as Justin Sullivan, the guitarist and lyricist, also featured the bassist Stuart Morrow with the fire-haired punk poetess Joolz as manager. Five years earlier, the post-punk agitprop of Gang of Four and the Mekons had come out of neighbouring Leeds and groups like the Three Johns (featuring the ex-Mekon John Langford), the Redskins from York and Bradford's Southern Death Cult kept the area's music scene buoyant.

New Model Army mixed punk and folk influences with a leftist agenda and material like "Spirit of the Falklands" and "Small Town England" struck a chord with clog-wearing students, John Peel listeners, readers of the weekly music magazine Sounds and workers opposed to the Tory government policies of the day.

In 1983, the three-piece group released their d�but single, "Bittersweet", on their own Quiet label before signing to Abstract Records. The following year, the 45s "Great Expectations" and "The Price" and the Vengeance mini-album knocked the Smiths off the top of the independent charts. EMI decided there was a market for New Model Army, who sounded like the natural heirs to the punk pioneers Crass and predated the Levellers by nearly a decade.

New Model Army signed to the major label and survived the backlash from the hardliner constituency amongst their fans. The trio broke through to the mainstream in 1985 with No Rest For the Wicked and never compromised, famously appearing on Top of the Tops wearing T-shirts proclaiming "Only Stupid Bastards Use Heroin" to promote "No Rest", their first bona fide hit single (the B-side was indeed called "Heroin"). New Model Army grew in stature throughout the rest of the Eighties, with Sullivan and Heaton the only constant members of a trio completed by Jason "Moose" Harris and subsequently Nelson on bass with the violin-player Ed Alleyne-Johnson in tow for the Thunder and Consolation (1989), Impurity (1990) and Raw Melody Men (1991) albums.

Heaton and Sullivan also contributed to several recordings by Joolz, in particular the Love is Sweet Romance and Mad, Bad & Dangerous to Know EPs and the Hex album (1990).

Despite setbacks such as a ban by the American Musicians' Union - possibly because the lead-off single from The Ghost of Cain album in 1986 depicted Britain as the "51st state" of the Union rather than the "poor musical quality" then given as justification - and Sullivan's being electrocuted on stage in June 1992, New Model Army soldiered on regardless, building a large following in Germany, Holland and Scandinavia as well as the UK. In 1993, they moved to Epic/Sony for the equally uncompromising The Love of Hopeless Causes album which addressed the Gulf War and other issues. The following year, New Model Army released a dance remix of "Vengeance", the title track from their mini-album, as a protest against the Criminal Justice Bill.

"It's important to believe in what you're doing. If you can't find anything to sing about, then sing about something that is important. That was maybe the core of what we did," said Heaton when reflecting on his 16 years with New Model Army. He left the group after the Strange Brotherhood album in 1998 but helped them complete the Lost Songs double CD of B-sides and Abandoned Tracks issued in 2002. He subsequently tried to give new Bradford bands a helping hand through the weekly Fresh Milk night held at the Love Apple music venue. "There are a lot of kids with guitars strapped to their backs, it's the do-it-yourself attitude," he explained. "I still get a buzz from recording people." He started a solo project under the name Gardeners of Eden and composed instrumental music for various small-budget films.

Amongst his ambitions, the drummer said he wanted to make a good record for New Model Army and Joolz to be joint No 1 in the charts, to break down the rock-and-roll myth, to leave a lasting impression on the world, to live by the sea and to die with my clogs on.

Vengeance topped the Indie charts back in 1984 and New Model Army subsequently placed 14 singles and eight albums in the Top Seventy-Five. They remain active to this day and will undertake a European tour next month.

Paying tribute to his former comrade, Justin Sullivan said: "Robert Heaton was the perfect gentleman and the powerhouse behind the rhythm-driven sound of New Model Army."